November 29, 2019
Recently, my old trusty Garmin Edge 510 cycle computer stopped working, as it could not be turned on at all. Besides, all the rubber bits on the Edge 510 were disintegrating. Seems like a good time to get a new cycle computer, since I already had the Edge 510 for more than 4 years. Warranty coverage has ended long ago, and it is probably not worth repairing an old electronic device, when I can get a new one with much more features and better performance for a good price.

I considered getting other brands of cycle computer, such as Lezyne, Wahoo, and other smaller brands. However, based on ease of use, and also my preference for the Garmin ecosystem, I decided to get another Garmin. Besides, I have so many Garmin mounts that will become useless if I change to another brand of cycle computer. I have good experiences with Garmin and so I don't really feel a need to try out another brand. In fact, I also wrote a more in depth review on the Edge 510.

The latest Edge 5XX series is this Edge 530, which has a lot more features that my previous Edge 510. Not that I will use all of them, but it is interesting to see what they offer nowadays.

The higher end Edge 830 or even Edge 1030 is much more expensive, and has too many features that I will not need to use. I also considered the cheaper Edge 130, but that one does not support Di2 integration, so it is disqualified from my point of view.

And that is how I ended up selecting the Edge 530 as it ticks all the correct boxes for me. This time, I decided to buy from the local bike shop to support them, instead of buying it online. There is a promotion going on, which gives a free sensor bundle (speed and cadence) when you buy the Edge 530 head unit.

I actually don't need the extra sensors, as I already have enough sensors, and I tried to get a discount instead of getting the sensors. However, that was not possible, and so now I have an extra set of sensors that I can attempt to use, or sell away. 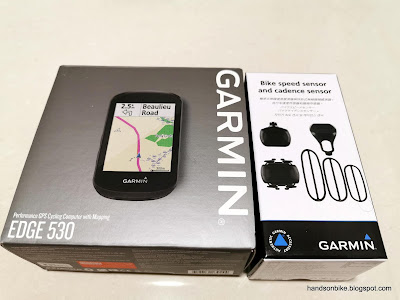 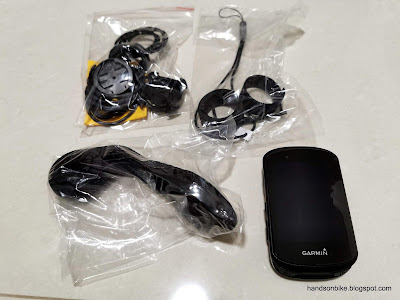 Comes with various mounts and adapters, including the durable rubber bands. 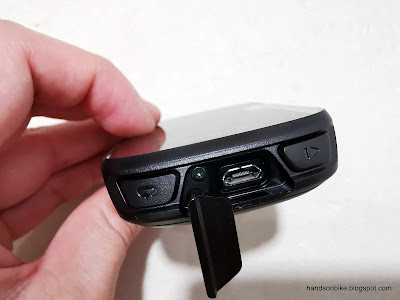 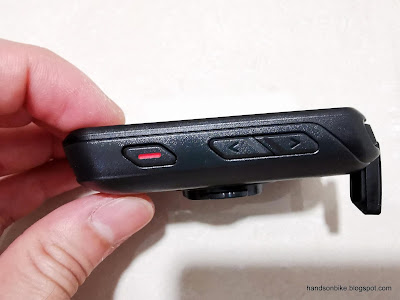 On the left side of the head unit, the power button (red) is located near the top, while the Up/Down buttons are used to scroll through the menu. 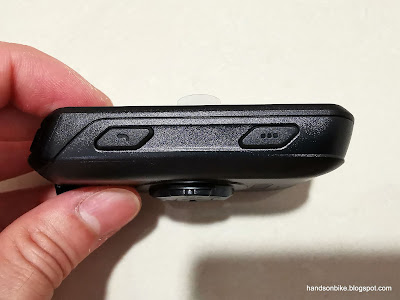 On the right side of the head unit, the Back button is located near the bottom, while the Enter/OK button is located near the top.
For this Edge 530, physical buttons are used instead of touchscreen like on the Edge 510. There are advantages and disadvantages to both kinds of systems.
A touchscreen interface makes it easy to press the button that you want, but the on-screen buttons also takes up valuable space on the screen. The Edge 510 touchscreen interface seems to be pressure-based, which allows it to be used in rain or with gloves on, but the tactile feeling and sensitivity is poor. The touch feeling is nowhere like using a modern smartphone.
On the other hand, using physical buttons gives better tactile feeling, and the screen can display more items without the on-screen buttons taking up space. However, I need to remember where each button is and what it does, which is a bit tricky since they are all over the outside of the head unit where I cannot see the symbol molded on the buttons. 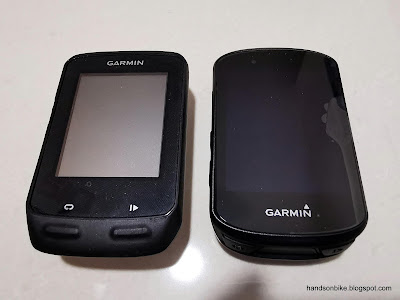 Comparing the old Edge 510 on the left to the new Edge 530 on the right. The screen technology looks totally different! Overall dimensions (length and width) are similar. 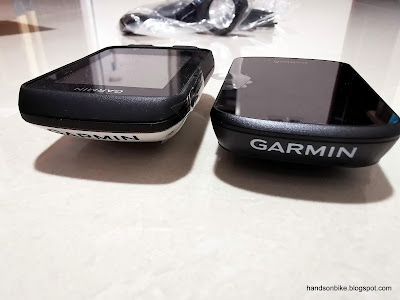 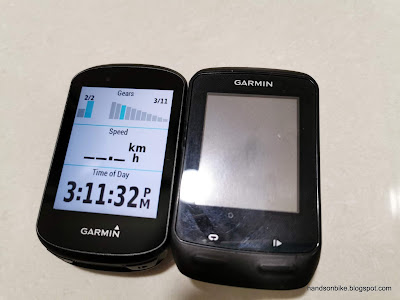 When the Edge 530 is turned on, you can see the difference in screen size, even though the overall head unit dimensions are similar. Screen on the Edge 530 is much bigger and of higher resolution. 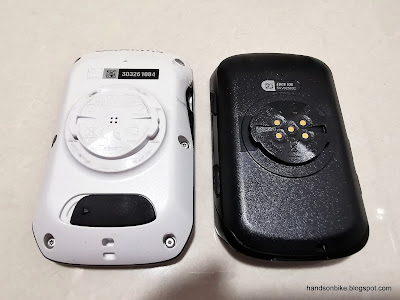 Edge 510 has the charging port at the back, covered by a rubber flap. The Edge 530 has metal contacts at the mount area, which allows it to be powered by a Garmin Charge Power Pack for super long battery life. 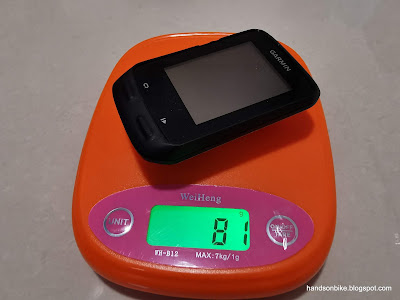 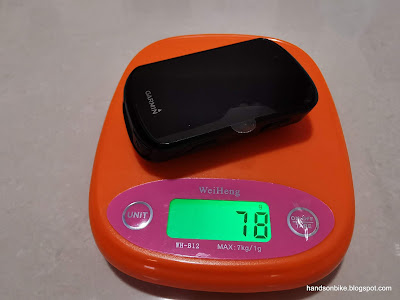 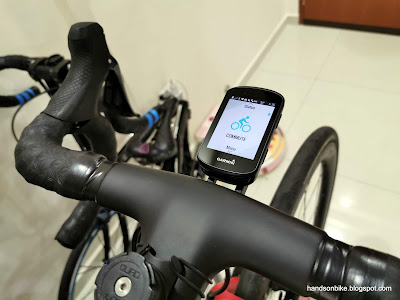 Mounts without any problem on the Canyon Endurace. The big colour screen looks good! There is enough space between the head unit and the handlebar to operate the buttons at the bottom of the unit. 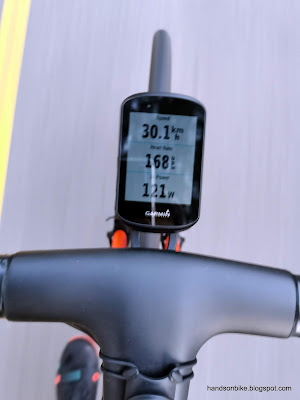 Testing out the sensors after linking them up to the Edge 530 head unit. Speed + cadence sensor working well, heart rate sensor from the Garmin Forerunner 235 working well, 4iiii Power Meter working well.
I am pleased with the new Garmin Edge 530 as everything is working perfectly. The screen display is big, clear and colourful, and the buttons are easy to operate, although I am still trying to remember the function of each button. Linking the head unit to all my sensors is no problem at all, the Garmin was able to detect all the sensors easily. Even linking the head unit to the Di2 system, to show the selected gear, is not an issue. I can still control the screen display of the head unit using the Di2 buttons on top of the Di2 road shifters. 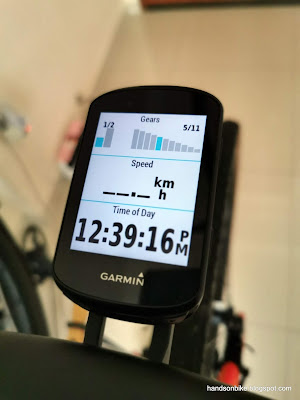 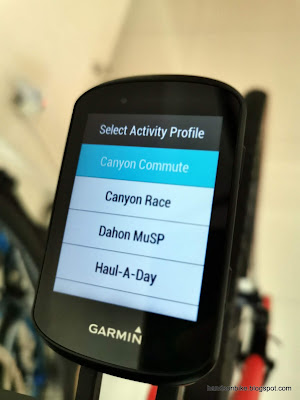 My different activity modes for the different rides and bikes.
The head unit also starts up fast, much quicker than the Edge 510. GPS locking is fast as well. Battery life is also very good, compared to the Edge 510. I don't have any numbers to show how much faster the features work, or how much longer the battery lasts, but they are different enough that I can feel the improvement easily.