April 08, 2019
After taking a look at the handlebar area of the Ninebot by Segway ES2 E-Scooter, let's now take a look at the other parts of the e-scooter. More specifically, the integrated lights and also the suspension design.

Warranty seal located at the bottom of the handlepost. I think there are 2 bolts behind the seal.

Front part of the e-scooter, which links the handlepost to the front fork to the platform.

Electric motor is integrated into the front wheel. Also, there is a simple coil spring located inside the rubber sleeve to act as the front suspension.

Front white light integrated into the top of the handlepost. It is quite powerful, and is angled to shine straight ahead. Does not really illuminate the road, it is more of a to-be-seen light.

Rear red lights located on both sides of the rear wheel. The rear lights will flash when you activate the brake lever.

There are also many LEDs located under the platform, which will glow nicely. You can choose the colours and the illumination pattern from the app! Very cool feature.

2 rows of 8 LEDs located under the platform. Coolness factor is very high!

The rear mudguard also acts as a foot brake if you step on the mudguard. However, I don't use it as the brake lever is more than powerful enough for me.

The underside of the rear mudguard that rubs against the tire for braking action. This will also wear out the rear tire faster. No idea what "Avoid Filling Hollow" on the tire means...

Rear suspension located under the platform. Very simple coil spring with no damping.

If you need to adjust the rear suspension to be harder or softer, you can adjust this bolt to increase or decrease the spring force.
It is nice to see a full suite of features on this ES2 e-scooter, such as the integrated lights and full suspension.

With integrated lights, it is safe to travel even when it is dark, without the need to install any additional lights. It also keeps the appearance of the e-scooter neat and tidy.

I think it would be better to travel over small bumps slowly, despite having suspension, to avoid shock damage to the suspension and other parts of the e-scooter. After all, electronic components can be sensitive to shock and impact, so it is better to ride with care to avoid unnecessary damage.

Kickstand is super useful to keep the e-scooter upright. It would be nice to have a rubber boot covering the kickstand as it tends to retract with a loud bang when it hits the platform.

Textured rubber layer on top of the platform for improved grip. Good design as it is soft and grippy.
This e-scooter can also be folded to save space, for easier storage and transport. As with most e-scooters, folding just means that the handlepost folds downwards onto the platform to make it compact. Handlebar width is maintained. 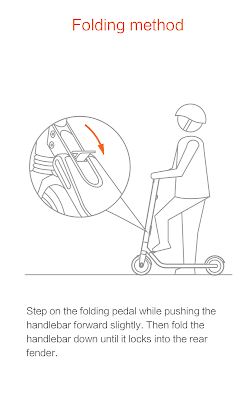 To fold, just step on the lever located at the front of the platform. This will unlock the catching mechanism and let you fold down the handlepost.

This is the lever which you will step on for folding the e-scooter. When you step on the lever, push the handlepost forward slightly to release the catching mechanism.

To prevent accidental activation, you can also fold up the lever when riding the e-scooter.

However, if you put in this way into a car, it will tend to tip over if not supported, as the heavy handlepost is on top. When it tips over, the grip will touch the ground (surface of your car boot?) first. This tends to twist the hook which locks the handlepost to the rear mudguard. It seems that the hook or rear mudguard might be damaged if it happens too often.

By not hooking onto the rear mudguard, there is no stress on the hook. The centre of gravity is also lower as the heavy handlepost is closer to the ground.

Although the front mudguard is slightly deformed by the front wheel at this position, it is OK as the material is soft and will regain its original shape once the ES2 is unfolded.